A large percentage of the energy released when petroleum is burned disappears out the exhaust system as heat. This has always been the case but the amount of energy released looks set to be cut by more than 80% thanks to a new system devised by BMW. BMW’s announcement of the new technology is somewhat of a technological bombshell as it adds yet another form of hybrid automobile – a turbosteamer…

Combining the innovative assistance drive with a 1.8 litre BMW four-cylinder engine on the test rig reduced consumption by up to 15 percent and generated 10 kilowatts more power and 20 Nm more torque. This increased power and efficiency comes for, well, … nothing. The energy is extracted exclusively from the heat in the exhaust gases and cooling water so it is essentially a quantum leap in efficiency.

The Turbosteamer is based on the same principle of the steam engine: liquid is heated to form steam in two circuits and this is used to power the engine. The primary energy supplier is the high-temperature circuit which uses exhaust heat from the internal combustion engine as an energy source via heat exchangers. More than 80 percent of the heat energy contained in the exhaust gases is recycled using this technology. 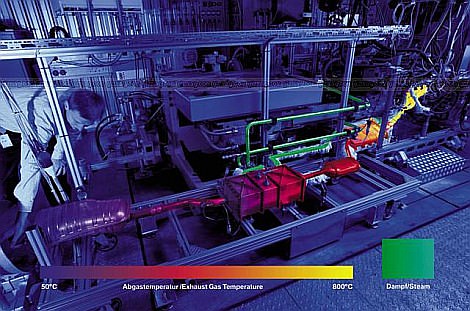